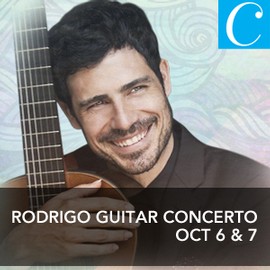 Before you step into Knight Theater to hear the romantic and fiery sounds of Rodrigo Guitar Concerto, check out these facts about our guest classical guitarist Pablo Sáinz Villegas, otherwise kown as "the soul of the Spanish guitar."
1. Pablo was born June 16, 1977 in La Rioja, Spain.

2. Sáinz Villegas has performed numerous world premieres, including the first guitar piece to have been written by five-time Academy Award-winning composer John Williams.

3. Pablo was given the honor of performing in the presence of the Dalai Lama as well as the Royal Family of Spain. He was also chosen to serve as Cultural Ambassador to the Vivanco Foundation and its museum, considered by UNESCO as the best museum of wine culture in the world.

4. Sáinz Villegas has an extensive history of winning prestigious awards. Perhaps his most honorable was when he became the first guitarist to ever win Spain's top classical music honor, El Ojo Crítico. Pablo also won the famed Parkening International Guitar Competition, and prior to that he was already the recipient of more than 30 international awards, including the Francisco Tárrega Award and the Andrés Segovia Award at age 15.

5. Pablo has helped serve over 15,000 children, as he is the founder of "The Music Without Borders Legacy," a program that seeks to bridge communities across cultural, social, and political borders for the benefit of youth.

6. Sáinz Villegas is well known for his emotional artistry with the guitar, whether it's been in an intimate setting or before more than 85,000 people, as he did while accompanying the admired tenor Plácido Domingo, at the Santiago Bernabeu Stadium in Madrid.

7. In the 2015-16 season, Pablo accompanied Plácido Domingo on a floating stage in the Amazon River which was broadcast live to millions of people around the world.
Charlotte Symphony Charlotte Symphony